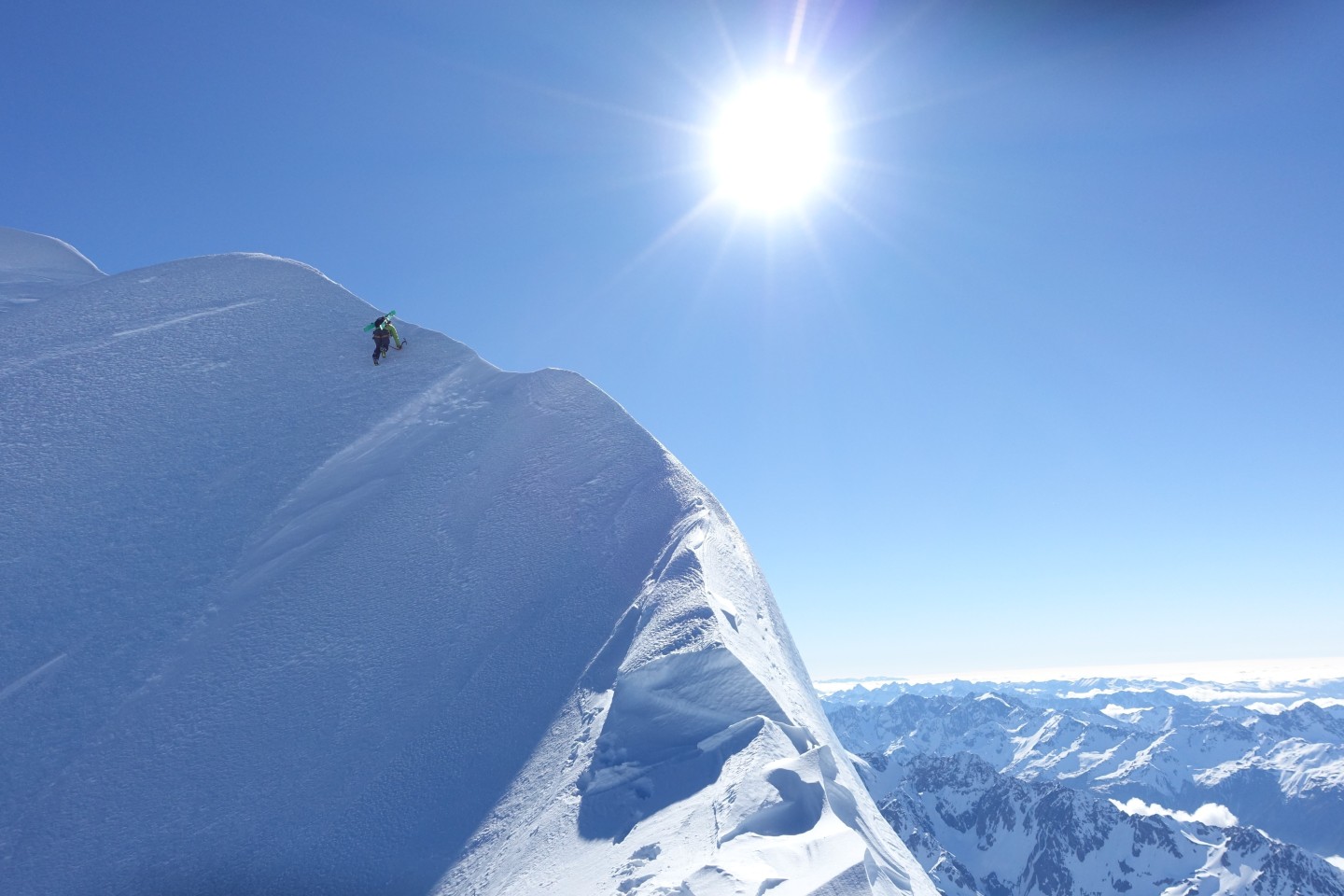 ‘2000m of steep skiing on a continuous face?’ I pondered the possibilities for a moment. It was 2013 and my long term mountain partner and good buddy Ben Briggs had just excitedly described the Caroline Face of Aoraki/Mt. Cook to me. Late steep skiing legend Andreas Fransson had just asked Ben if he wanted to join him on a trip to New Zealand that autumn. Ben declined the invitation, but we were left with little doubt as to what Andreas’s intentions were. A 2010 ESPN article by ski journalist Devon O’Neil listed the face as one of the world’s top 10 biggest unskied lines. The calibre of the challenge was clearly laid out. Attempts had been made by some of the world’s leading ski mountaineers and a Red Bull team had allegedly spent one million euros on an aborted ski descent of the face. That autumn of 2013 Andreas ended up going with another Chamonix friend of ours, Magnus Kastengren. Tragically, Magnus fell to his death while skiing towards the Caroline Face from the summit, the exact cause of his fall remains unknown. I have no doubt they would have succeeded had Magnus not fallen.

Highly visible from the road into Cook Village, the Caroline Face of Aoraki/Cook is of national significance to Kiwis even featuring on their five dollar bill. On first inspection the Caroline Face appears to be an unlikely looking mess of steep broken glaciers and formidable ice cliffs. An internet search reveals the rapidly changing nature of the face; the seracs can alter dramatically on an almost annual basis. The Caroline Face had not even been climbed until 1970 when it was ascended by Kiwis Peter Gough and John Glasgow over two days. These two renegade long haired hippies called their line the ‘Clit Route’, one can only assume this was due to its vague resemblance to female genitalia. The first ascent was major news and it had been rumoured Walter Bonatti had had his eye on the face.

When Ross Hewitt and I first went to New Zealand in 2015, it was with little expectation to attempt the face even though we told ourselves we would do so if it didn’t look to be a suicidal prospect. Our trip in 2015 was a success. We skied some adventurous new lines on prominent peaks and amassed many vertical meters of good skiing. After studying photos we took of the Caroline Face we envisioned a potential line that avoided much of the objective hazard on the face but we never got the weather window to launch an attempt. We knew we would return.

During our summer of 2017 New Zealand had a really fat winter. Our man on the ground in Cook Village and local ski mountaineer Cam Mulvey reckoned it was as good a time as any to come for steep skiing. Very unfortunately, Ross sustained a bad back injury and ruled himself out of the trip. Without hesitation I recruited Ben and Italian maestro and self-styled punk skier from the Julian Alps, Enrico Mossetti. Enrico and Ben had never met, however I had total confidence in the team from the start. The three of us booked our flights and three weeks later we were off.

Upon arrival in NZ we were treated to a week of rain and there was plenty of time to ruminate over just how dangerous a proposition the Caroline Face is. I went over the familiar pattern of searching my inner motivation and think about my young son. I think of Andreas and Magnus and my dozen other fallen friends in the mountains. My approach to risk has become wearier, my own mortality felt more acutely with experience and tragedy. Yet I want to act decisively when the time is right and the pull of extreme adventure remains strong. I had total confidence in my ability and that of the team but what scared me is that which I can’t control, namely avalanches and serac fall.

We finally got our window. On the approach heli flight into the hut we flew as close to the Caroline Face as possible. The face was white and we spotted a crucial weakness in the gigantic middle serac band. Two scouting trips to the bottom of the face later and we were brimming with anticipation, knowing that we could navigate the serac band without exposing ourselves to unjustifiable danger.

The alarm went off at midnight. Predictably, we didn’t get much sleep. Leaving the warm safety of the hut just after 1am, we headed to the bottom of the East Ridge, our chosen line of ascent. The rumble of serac fall just behind us gave the cold night air some menace. The first 300m of climbing was on 50 degree breakable chest deep snow which slowed our ascent to crawling pace. Wordlessly we toiled on, each of us wondering at the time whether turning back was the better option. Finally we were off the crust face and onto a delicate knife edge snow arête with huge drops either side. The exposure and cold weighed on us and it was with relief that at 9am we topped out the ridge and descended towards our line. After rappelling over the 100m vertical ice cliffs guarding the face, we knew we were totally committed. As fortune would have it, we had judged the conditions to perfection and coming off the rope we landed in stable boot deep powder.

Arcing out big turns we skied till our legs burned and then realised we had descended but a small fraction of the upper face. A route finding error would have proved disastrous, but we had done our homework and drawing on the sum of our experience we navigated a way down as fast as possible. The skiing was a pleasure and stress dissipated from my body with each smooth turn knowing that we were going to succeed. Halfway down the face we skied into a couloir dissecting the colossal middle serac band, making one last 40m rappel. Pausing to gaze up at the overhanging serac wall above me, we then charged through spring snow, losing hundreds of vertical metres in a matter of moments. Each blind roll gave us pause for thought, but Ben skilfully located the right exit line. An hour and a half after putting skis on our feet, we were safely off the face. Relief swept over me and also the immense satisfaction of knowing that we had skied the face in the best style possible and with what felt like a healthy margin of safety. To go in the first place was a gamble, but we had faith in our instincts and we were well rewarded.

Making a quick turnaround, two days later we flew back into the mountains knowing we had to grab the remainder of what was a stellar weather window. Ben, Enrico and I turned our sights to Malte Brun, a very steep and unskied peak known for its climbing routes and with an entire sub-range named after it. Our line followed a 600m long grade 4 climbing route, but had no idea what a Kiwi grade 4 route entailed. We found climbing the line almost a relaxing experience after Aoraki/Cook, with one short pitch of ice climbing. Intricately weaving through rocks, it was highly exposed and made for an elegant and interesting ski descent. We found ourselves making tight turns above cliffs and manoeuvring our skis over dry rock and agreed that the skiing was more technical than on the Caroline Face. The three of us thoroughly enjoyed it.

Everything was going almost too well. Skiing and hiking our way back to civilisation, the sting in the tail came in the form of having to down climb a towering steep moraine wall full of teetering loose car size blocks and compact, steep dirt we could barely stand on. Over the last few years global warming has wreaked havoc on the Southern Alps causing what were once trivial access trails to become very serious undertakings as the moraines have gotten far steeper and bigger. It was probably the most dangerous thing we had done all trip. 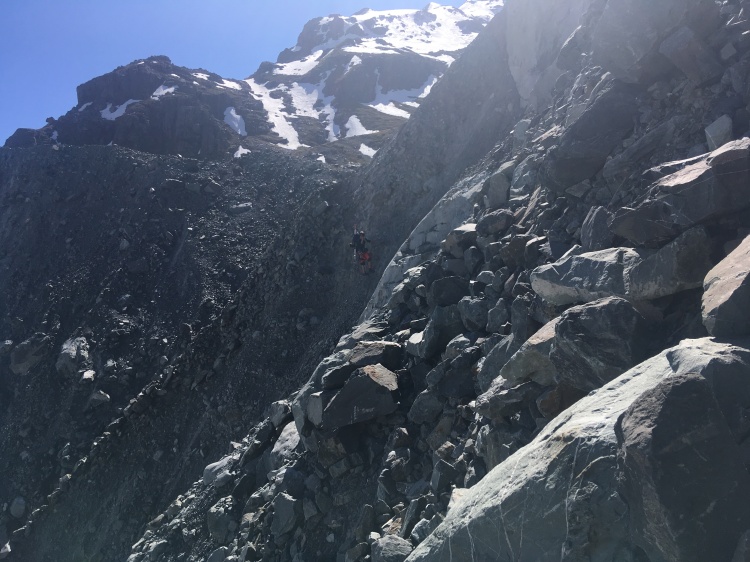 Skiing the Caroline Face was the biggest descent the three of us have ever made, and not the sort of line I want to try and ski every year. However, I’ve found that probing the limits of my own psychology and propensity to risk taking has its rewards. To leave our mark on a small piece of New Zealand history was a special thing and we were amazed at the warm reception we got from enthused locals who are very proud of their mountain. We did what I initially considered too risky back in 2013 after first looking over pictures of the face. The challenge and the scale of the mountain daunted us, yet we were able to find a way to succeed which didn’t amount to playing Russian roulette.

The trip ended with Enrico, Ben and I preforming Neil Diamond’s ‘Sweet Caroline’ at the Cook Village local karaoke night. Singing is not our speciality and the audience was too drunk to listen to us. But we didn’t care in the slightest.

Good quality ice cragging with @searlerdave yesterday. At least glacial recession is sometimes good for something. Access in and out of Rive Droite in the Argentiere Basin is super easy and safe now. PC @searlerdave @scarpa_uk #scarpa_uk @jottnar @grivel
%d bloggers like this: