The autumn can be a good time to get into the high mountains, not just for mixed and ice climbing, but also for skiing. With the right weather systems and conditions, steep faces can get plastered in sticky snow. However, the lifts close and the long approaches often deter speculative excursions. Getting a big line in good conditions is possible, but usually a long shot, and a willingness to suffer a little is often a pre-requisite. After some decent snowfalls at the beginning of Nov, Ben Briggs, Brendon O’Sullivan and I were keen to hike for some turns. The north face of the Domes de Miage looked white from afar, so that’s where we went. The north face is one of the most aesthetic and cleanly skiable 1000m north faces in the Alps.

Me on the approach by the Chalets du Truc. Its a little over an hours hike from the lower car park. With a burly 4×4 you can drive up to here.

The trippiest sunset I have ever seen. This isn’t photoshopped, the sunset lit up the clouds in the valley turning them into flames. 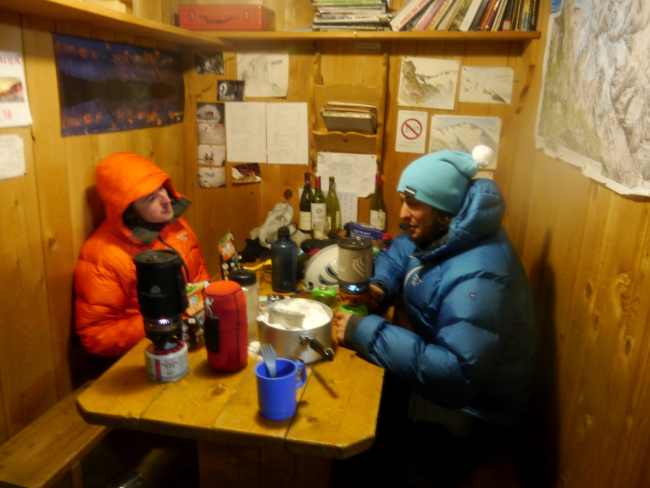 The Plan Glacier hut has a genuinely remote feel in autumn/winter, set at the back of a glacial cirque in a quiet part of the range. From the chalets it took us another 4-5 hours of trail breaking.

Approaching the face. It soon became apparent that the north face was not going to be skiable. We instead decided to boot up the Mettrier. After 600m, the wind had stripped too much snow off the ridge and we turned around with another 400m to go to the summit. However, we were treated to some great exposed skiing on variable but generally pretty good snow.

Skiing high on the arete.

Ben approaching one of the lower chokes.

Looking down the Matteron’s east face 😎. As some of the first snow hits the high peaks it’s a welcome break from the summer’s heat. A nice snowy trip to the summit on Sunday, I’d never put crampons on so low, well below the Solvay. Yet conditions were good and we made good time, nice work Stan!
Loading Comments...
%d bloggers like this: